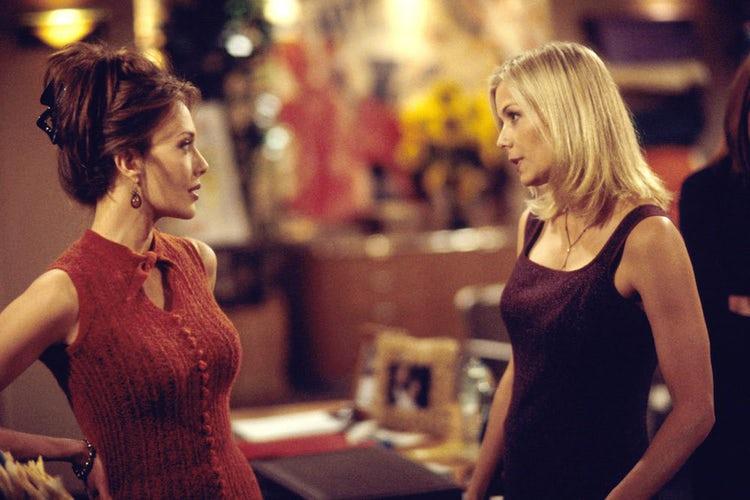 Brooke and Taylor's rivalry has stood the test of time.

As with most soap operas, The Bold and the Beautiful is filled with love triangles that have existed throughout the entire run of the series. Katherine Kelly Lang has been on B&B for nearly forty years now and for the majority of her time on the show, her character has been at odds with another character, previously played by Hunter Tylo.

The rivalry that started between Brooke Logan and Taylor Hayes because of Ridge Forrester is still very much alive to this day on the show. However what fans may not know is while Brooke and Taylor fought for Ridge’s attention on screen, the feud apparently continued in real life between actresses Hunter Tylo and Katherine Kelly Lang. Keep reading to know what happened between the two leading ladies of the Bold and the Beautiful.

Why Hunter Tylo left the Bold and the Beautiful in 2012

Brooke and Taylor’s infamous cake fight at Hope and Liam’s wedding made for a compelling soap opera drama, but did you know that the actresses were thought to be feuding in real life too? Apparently, there was bad blood between the leading ladies because Hunter’s air time on the show was getting cut while Katherine was always on the frontlines. Hunter had enough of it and that’s why she decided not to renew her contract with the show.

There wasn’t an epic showdown or anything but after Ronn Moss left the show in 2012 due to health issues, Katherine and Hunter were involved in a passive aggressive Twitter exchange. A fan tweeted at Katherine, “HT fans love 2 spread vicious rumors/gossip about U & she does nothing 2 stop them. Ignore the haters.”

To which Katherine replied, “Why would she want to do that? Hunter, why don’t u talk to me?” Hunter was active on Twitter at the time and joined in the conversation saying, “Don’t get caught up in chaos, we are all on the same team.”

Their relationship remained tense and apparently their co-star Susan Flannery always managed to keep everyone civil since she was close to both of them. However in late 2012, Susan also left the show and the feud between Hunter and Katherine began “spiraling out of control.”

Hunter Tylo clears up feud rumors: “I really like Katherine”

Thankfully, the pair seemed to have made amends after this brief feud. Talking to Michael Fairman TV in 2013, Hunter seemed to clarify that Brooke and Taylor’s onscreen feud didn’t allow the ladies to bond in real life. She said, “We have to put distance between us and not bond too much. We cannot look comfortable with each other. We need to look like we are in a place of competition.”

Hunter worried about the comfortability that could show through the camera.

“Katherine and I try to work with each other as actors. We will run lines and we respect each other. For example, trying to talk about what is going on with politics on television, we can’t do because we can’t bond on anything. It sucks, I have to say. I really like Katherine. As people, and as women, we have a lot of common. We both love horses, we love cooking, and we love to do stuff with our kids. So it becomes a kind of a shame when the storyline gets like this.”

In a 2018 interview with TV Insider, Katherine opened up about her experience of working with Hunter. She was quoted saying,

“Brooke needs a rival. Taylor’s return has given Brooke a reason to stand up and fight. It’s great to work with Hunter again. This is bringing back the great history of the show and those Dynasty moments we used to see more often.”

Indeed, Taylor’s return to the canvas has brought back a lot of memories for fans. Although Hunter decided not to return, newcomer Krista Allen has been doing a pretty good job at playing Taylor.