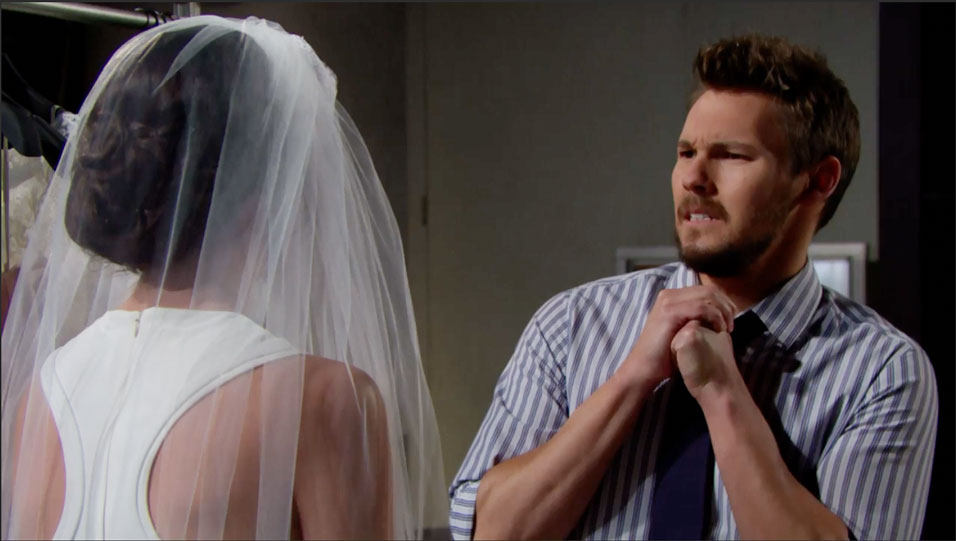 All of Steffy’s weddings on the Bold and the Beautiful

Steffy Forrester tied the knot with Dr. Finn in a beautiful wedding at the Forrester mansion among her loved ones. But the celebration wasn’t without drama as Finn got the shock of his life in the form of Sheila Carter. The villainess is back and is now related to the Forresters by law. That can’t be a good thing. Let’s take a walk down memory lane to Steffy’s many weddings. Our girl has been married five times on the show so far, and believe it or not her latest wedding was not the most interesting one. Here’s a quick look at her wedding history on the CBS soap.

Long time viewers will remember that Steffy first tied the knot a decade ago on a grassy slope in Aspen. It was with Liam, of course. He was then engaged to Hope but Steffy schemed with Bill and got Liam to give her the ring instead. Poor Hope watched her fiance marry her step-sister from a gondola. Their first marriage didn’t last a year as Liam filed for divorced once he found out about Bill’s involvement.

Fans will agree that Steffy’s second wedding was the most iconic one as it involved the bride cruising down the aisle on a motorcycle. Jacqueline MacInnes Wood rides a motorcycle in real life and the writers thought it would be fun for her character to ride into her wedding in style. She was pregnant with Liam’s baby during this time. However, she ends up losing her baby in a motorcycle accident and she divorces Liam thinking she can’t ever be a mother.

READ MORE: Our favorite weddings on the Bold and the Beautiful

Steffy ziplined to her Australian wedding

Steffy’s third wedding was a bit more dramatic. After some back and forth, Liam was once again engaged to Steffy. But scheming Quinn knew that Wyatt was in love with Steffy at the time. So she does what any mother would do for her son.

She kidnapped Liam and hid him in a cabin. Liam was also amnesiac during this time and did not remember his feelings for Steffy. With Liam out of the picture, Steffy and Wyatt had a romantic wedding at the beach. Of course the relationship didn’t last because of Quinn’s meddling and her lingering feelings for Liam.

Steffy and Liam married for the third time in Sydney, Australia. Steffy really knows how to make an entrance to her wedding. This time, she ziplined to the altar in her wedding dress and had a beautiful ceremony with the Opera House as a backdrop.

But the marriage ended just as dramatically as Steffy ended up cheating on Liam with his father. She got pregnant and didn’t know who the baby daddy was. They had a DNA test revealing that it was Liam and they got engaged again. Well we know it didn’t last long as Liam got Hope pregnant.

For her fifth walk down the aisle, Steffy chose the famous Forrester Mansion which has seen more weddings that one can remember. The wedding itself was gorgeous but it was not without drama. Finn’s birth mother has entered the scene and it was none other than Sheila Carter.

Tune in to the Bold and the Beautiful every week day to see if fifth time’s the charm for Steffy Forrester. Meanwhile, Steffy actress Jacqueline MacInnes Wood is happily married to her talent agent husband, Elan Ruspoli.

The couple is expecting their third baby this year. After she gave birth to her second son, Lenix, everyone who follows her on Instagram must’ve been surprised that she was swimsuit ready in a blink of an eye. Here’s how the soap star got back in shape so quickly.