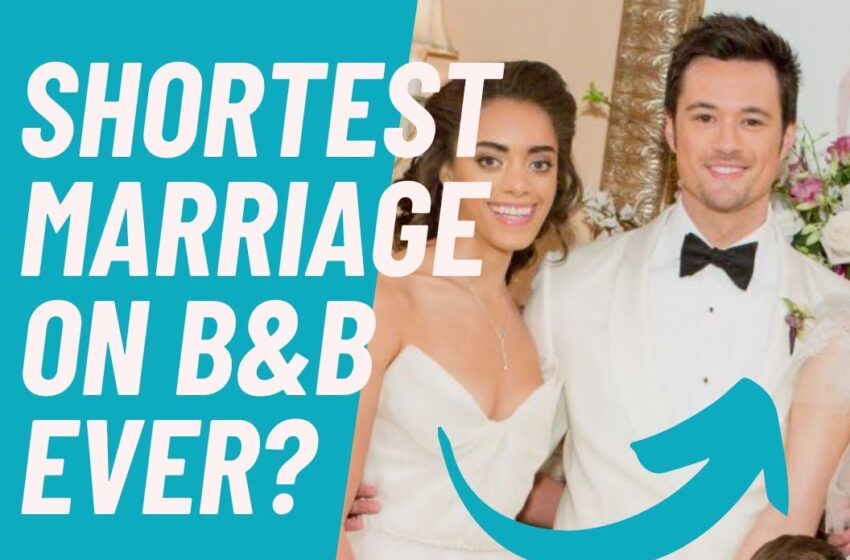 Here are the shortest marriages on B&B

12 Shortest Marriages on The Bold and the Beautiful

You’ll remember that in the late 90s, Brooke had an affair with her daughter Bridget’s husband, Deacon Sharpe. Now we don’t know how this storyline got the greenlight at the writers’ room, but Bridget was as disgusted as the audience when she found out. However, Brooke did try to cover up her affair by marrying a Forrester co-worker, Whip Jones. The marriage of course didn’t last long as Brooke gave birth to Hope and she found her way back to Ridge.

Another one of Brooke’s shortest marriages was with Grant Chambers in 1997. Well she didn’t actually want to marry the man and wanted Ridge to stop her from going through with the wedding. But Ridge didn’t make it in time and Brooke had to marry Grant. However, their marriage was never legal.

Brooke was also married for a short four months to Bill Spencer. The duo tied the knot in May 2017 but when Brooke found out that Bill had blown up the Spectra Fashions building with Sally and Liam inside, she broke it off.

READ MORE: Our favorite weddings on the Bold and the Beautiful

In 2007, Taylor and Nick Marone were married for just under a year. They fell in love after Nick began seeing Taylor professionally. They wanted to have a kid but Taylor found out that she couldn’t have her own children. In a classic mix-up, Taylor ended up being implanted with Brooke’s eggs and gave birth to Jack. When the truth came out, the marriage was over.

Steffy and Liam had an impromptu wedding on a hill in Aspen in October 2011. But the serial waffler decided that he wanted to be with Hope and filed for divorce. This was their first wedding and it did not even last a year.

Our girl has been married five times on the show so far, and believe it or not her latest wedding was not the most interesting one. Here’s a quick look at her wedding history on the CBS soap.

Ivy and Liam were in love but it was a marriage of convenience when they wed in 2015. Ivy’s immigration status had expired and fearing that she might lose her life in the US, she asked Liam to marry her. Just days later, Ivy found out that she wasn’t getting deported. But Quinn convinced her to keep up the ruse. Eventually, in a few weeks, she told Liam and the marriage was annulled.

Less than a year after the wedding, Rick found out that Caroline had kissed Ridge, so he began an affair with his ex-girlfriend, Maya. Caroline fought for their relationship but they divorced in 2015 after she found her husband in bed with Maya.

After her relationship with Rick went up in smokes, Caroline ended up falling in love with Ridge but their relationship was doomed because she was pregnant with his son, Thomas’ baby. They tied the knot in September 2015 but after she gave birth to Douglas, Ridge broke up with her and their marriage was over.

Katie and Thorne were married for less than six months. They tied the knot in the Forrester living room in the fall of 2018 but Thorne walked out on their marriage on Valentine’s Day 2019.

Hope married Liam’s brother, Wyatt, in Monte Carlo in August 2014. But she had only tied the knot because she thought Liam had abandoned her, when in reality he was saving Ivy from drowning. She eventually became pregnant but lost the baby and they called it quits in October 2015.

During the baby Beth drama, Hope believed that she had lost her daughter in childbirth. She wanted Liam to have a happy life with Steffy and Kelly, so she annulled their marriage only a few months after getting married in September 2018.

After divorcing Liam, Hope went on to marry Thomas, who knew that her daughter was alive and was keeping that information from her. Hope and Thomas’ 2019 marriage has to be one of the shortest marriages in the history of the show as they only spent a day or two as husband and wife.

Watch this video from our official YouTube channel if you want to know about the 12 Shortest Marriages on the Young and the Restless.