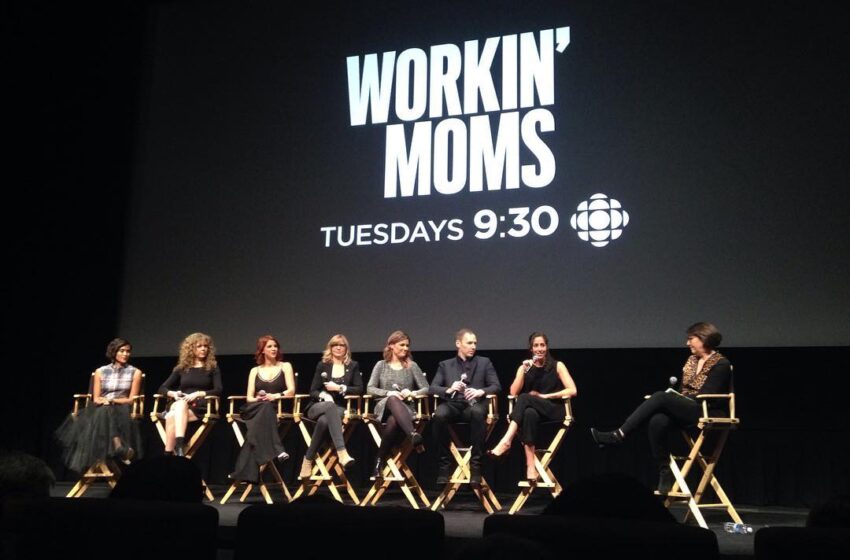 When it comes to the cast of soap opera actors, we’re always interested in learning about their real life. Apart from their real life, currently, we’re more worried if we’ll be able to watch season 7 or not. Not to be worried, all our favorite workin’ Moms cast including Catherine, Nathan, Anne, Sloane, Jenny, Lionel, Frankie, Val, Alice, Nathan Jr, and Heather are returning in season 7. Like the other season, It will stream on Netflix and is available worldwide.

Will there be a Season 7 of Workin’ Moms?

Who is Kate Foster’s real-life husband?

Catherine Reitman is happily married to Phillip Sternberg since August 2009. Yes, our favorite onscreen couple Kate and Nathan are real-life partners too. And how lovely is it to hear that they have two children Jackson Sternberg and Liam Sternberg just like they have Charlie Foster and Ella Foster onscreen! She also claimed that she suffered from Postpartum depression after she gave birth both times. Last month, Catherine and Philip celebrated their 14th anniversary. Catherine wrote on Instagram, “Happy anniversary to this absolute thirst trap. Oh does this man trap. 14 years ago I signed on to a life with this dude, completely unaware of how lucky I would be.”

Who is Anne Carlon’s real-life husband?

Dani Kind is happily married to Darius Bashar. Darius has gained the media limelight as he is the husband of the famous veteran actress. However, Darius is private in nature and hence exact facts about him are still not known. He has also preferred staying behind the camera. Dani has not mentioned anything regarding her family including marital life and parenthood too. Hence, Dani’s personal life is out of the spotlight. These lovebirds are blessed with two sons but their names are still not known.

Who is Sloane Mitchell’s real-life husband?

Enuka Okuma married Joe Gasparik on July 2, 2011. He is a musician and has written many hit songs like Moving On, Vistas, On my mind, and many more They met for the first time in Toronto when they were working for the same television crime drama series. They dated for three years before getting tied into a knot. The friendship that later got turned into a relationship has been still showing a strong bond of love and their sizzling chemistry is often cherished by their fans. Enuka often adds a post on Instagram with her husband. They have been married for eleven years however, the couple doesn’t have their own kids. But it is always interesting to see their love and support for each other in every step of their lives.

Who is Jenny Matthews in real life? Who is she married to?

The Canadian actress, Jessalyn Wanlim is married to Brett Howell. It has been more than a decade since they’ve been in a romantic relationship. She started dating Brett Howell in August 2010. Unfortunately, Jessalyn suffered a miscarriage in December 2018. However, the couple was there for each other to overcome the tragedy. And In 2020, came the good news when they welcomed their son Cameron Howell on January 8, 2020.

Are Nathan and Kate real-life couples?

Phillip Sternberg who is widely known as Nathan Foster was born in 1978. He is also the executive producer and director of Workin’ Moms. Certainly, he is popular, but he gained fame and came into the media spotlight as the husband of Catherine Reitman. Onscreen Kate and Nathan got married in August 2009 in Santa Barbara, California. The lovers met when Catherine went to pick up her friend’s paycheque after an audition. After six months of the proposal, the duo got engaged.

You’re going to imagine the same proposal after you hear theirs. Catherine and Phillip approached a cliff where Phillip asked Catherine to walk over the fencing and onto the cliff’s edge. And there she could see that Phillip has written: “Will You Marry Me?” Following it, the couple is now blessed by two sons Jackson Sternberg and Liam Sternberg.

Is Ryan Belleville’s other half’s name still a mystery?

His fans know that he is married but he has not shared much about his marital life on public platforms. He neither has made a single post regarding his partner on his Instagram. Hence, we can say that his personal details are away from the spotlight. Ryan Belleville has two children. They would have a family of 5 but sadly, their daughter Molly was diagnosed with Edwards syndrome in May 2013 and passed away after three weeks.

Who is Juno Rinaldi’s other half?

Juno Rinaldi married a guy she was dating for a few years. She is married to Michael Rinaldi. He is an actor who is known for What If, The Heaviness of Things That Float, and Snarl Moreover, he is a professional WordPress, Film Edition, And has been working as the assistant editor and production assistant at Make Me Video for years since 2013. The lovebirds are blessed with two sons one is age 14 and the other is 10 years old. However, they have not shared other information about both children. The family of 4 is living a happy line in Gage Park, Hamilton.

Who is Val Szalinsky’s Beau?

Sarah McVie is not a married woman and it looks like she isn’t dating anyone as of now. Furthermore, she keeps her previous relationships out of the spotlight. But she claims that she is a proud dog mom to Coco. Apart from these, Her posts on Instagram of her nephews and nieces reveal that she adores her family. Certainly, she is a mother on TV but merely an aunt in real life.

Does Sadie Munroe have an affair?

Sadie is still young to be in a relationship and announce it to the public. Hence, we still don’t have information regarding Sadie Munroe’s boyfriend or relationship status. She is a good and well-educated child unlike her character in Workin’ Moms as we’ve seen her many time behaving inappropriately in school.

Kyle Harrison Breitkopf is more focused on sharpening his acting skill rather than getting involved in any kind of Relationship or love. However, we don’t know much more about his dating status as he has kept his personal information confidential and rarely speaks anything related to his personal life with the public. But, there is a possibility of him being in a relationship with his classmate but he’s quite not comfortable revealing it.

Is Martha single? Or is she dating anyone? Well! She has not given any insights about her dating life and her past dating history is also not known. We can predict that she is single. The details regarding her husband or boyfriend have not surfaced from her side yet. She seems to be very personal regarding her romantic life too.