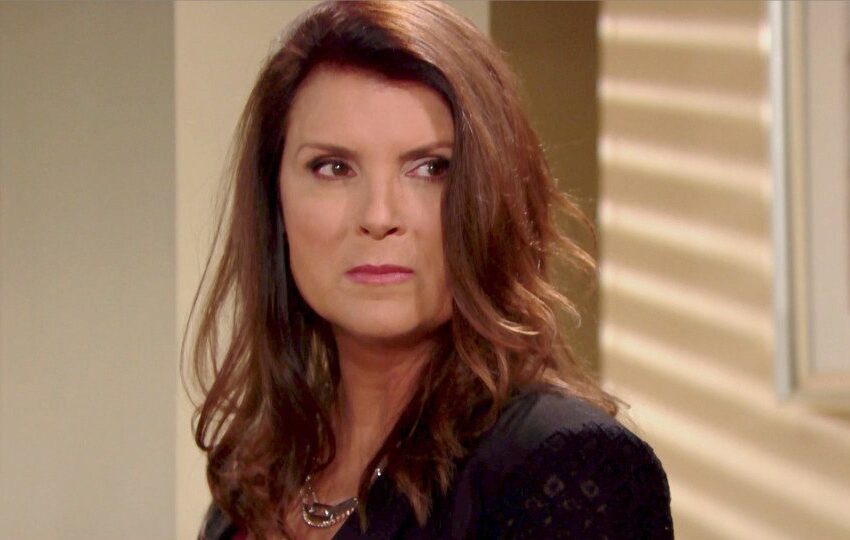 Sheila Carter might be leaving the Bold and the Beautiful

Is Kimberlin Brown leaving Bold and the Beautiful? Sheila Carter done with LA?

Sheila Carter’s time on the Bold and the Beautiful could be coming to an end. Her days in Los Angeles could be numbered as the walls are closing in on her. The infamous villainess has been terrorizing both Genoa City and Los Angeles for years. Although she’s presumed to be dead on Y&R, could she make a comeback and torment Lauren Fenmore once again? Let’s talk about Sheila’s possible future on Bold and the Beautiful and Young and the Restless.

Is Sheila Carter leaving the Bold and the Beautiful?

Sheila has a long history with Y&R’s Lauren Fenmore, whom she has tried to kill many times. Lauren’s husband Michael Baldwin also shares his wife’s dislike of Sheila because she has tormented Lauren for years. If Sheila ever shows up in Genoa City, we can speculate that he would be the one to put an end to her reign of terror.

After her latest return to The Bold and the Beautiful, Sheila accidentally shot her son Finn, during a confrontation with her daughter-in-law Steffy. Sheila was arrested but quickly escaped from prison. Some fans think that Sheila might strike again and will be sent to prison for good.

Yes, she escaped prison last time but if she’s sent to prison again, it has to be with better security. If that doesn’t happen, most fans speculate that Sheila will be killed. There are a number of people who would love to get their hands on the evil woman. She hasn’t really made any friends in Los Angeles. Well, except for Deacon Sharpe.

Actress Kimberlin Brown would certainly love to stick around. She says, “Hopefully I’ll be on The Bold and the Beautiful for a long time to come. If they put me on a back burner for a while due to circumstances, I’d love to stay within the CBS family.”

READ MORE: The 7 Greatest Young and the Restless Rivalries

Although Sheila is presumed to be dead on The Young and the Restless, she might still find a way to return to Genoa City if things don’t work out with Finn. If she makes it out alive from Los Angeles, Sheila will find someone else to torment and continue to terrorize others for years. If she’s sent to prison, she might escape it again.

On The Young and the Restless, Sheila Carter’s last appearance was on February 9, 2007. Sheila had gotten plastic surgery to look like Phyllis Summers. When she took the real Phyllis, baby Summer and baby Fen hostage, Lauren tracked them down at an elderly home. When Sheila saw Lauren with a gun, she used Summer as a shield to protect herself. Lauren figured out who the real Phyllis was and shot Sheila dead.

Years later, the show hinted that Sheila hasn’t kicked the bucket yet when Michael realized that she might still be out there.

What do you think is gonna happen to Sheila Carter? Leave a comment below to let us know. Subscribe to our YouTube channel to stay updated on the latest soap opera news. And don’t forget to watch The Bold and the Beautiful on CBS to see how Sheila’s story ends.

Did you know that Kimberlin Brown is recovering from an ankle surgery? Know all about it in this video.