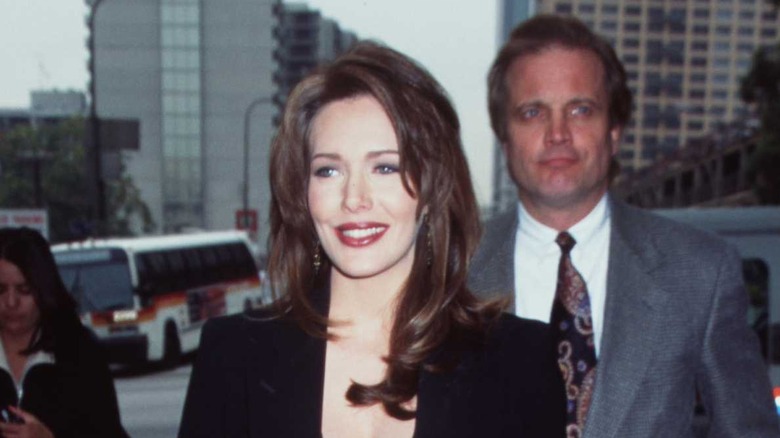 Hunter Tylo with her husband, Michael Tylo behind her at the L.A. County Superior Court.

As Taylor Hayes, Hunter Tylo was a part of an eternal love triangle between Brooke and Ridge on the Bold and the Beautiful. On the show, she played the doctor on and off for more than 30 years. The actress has been out of the limelight for a while now and recently turned down the chance to reprise her popular role on the Bold and the Beautiful. As her alter ego went through various twists and turns on the canvas, Tylo’s own life was in turmoil. Let’s take a look at Hunter Tylo’s real life events that you may have not known.

While the Bold and the Beautiful remains her most popular show to date, Tylo has had stints on other soaps as well. Before B&B was launched, she played Marina Toscano on Days of Our Lives for a year and Robin McCall on All My Children from 1985 to 1988.

In 1996, she had signed a contract to star in the primetime soap opera, Melrose Place but before she could even work, she was abruptly fired for breach of contract. Tylo was pregnant at that time with her and then husband Michael Tylo’s third child, and apparently her contract demanded that she could have no marked change in appearance. Tylo took producer Aaron Spelling’s production company to court and won a settlement of $4.8 million.

Not long after her court win, Tylo had to fight to save her newborn’s eyesight from a rare, potentially fatal cancer. The actress had welcomed her second daughter, Katya Ariel, in 1998. Tylo shared that she noticed something was wrong with her newborn’s eye when she was about two weeks old. It turned out to be retinoblastoma and Katya had to have her right eye removed.

Not only that, the doctors discovered a growth on Katya’s left eye too and suggested chemotherapy. However, a week later, they were shocked to see that the tumor had disappeared on its own.

After her daughter was declared cancer free, Tylo along with her husband were successful in passing a legislation in California that made eye screenings a part of a six week wellness program for babies.

Another tragedy struck the Tylo family in 2007, when their son, Michael Tylo Jr., drowned in a tragic accident. Their oldest child, Mickey, was only 19 years old when he was found in his mother’s pool in her Las Vegas home. It was reported that he had suffered a seizure when he fell in the pool.

A born again Christian, Tylo credits her daughter’s cancer recovery to massive doses of prayer and said her faith helped her deal with the passing of her son. She last appeared on the show in 2019. As she declined to return to B&B, the role was recast with Krista Allen.