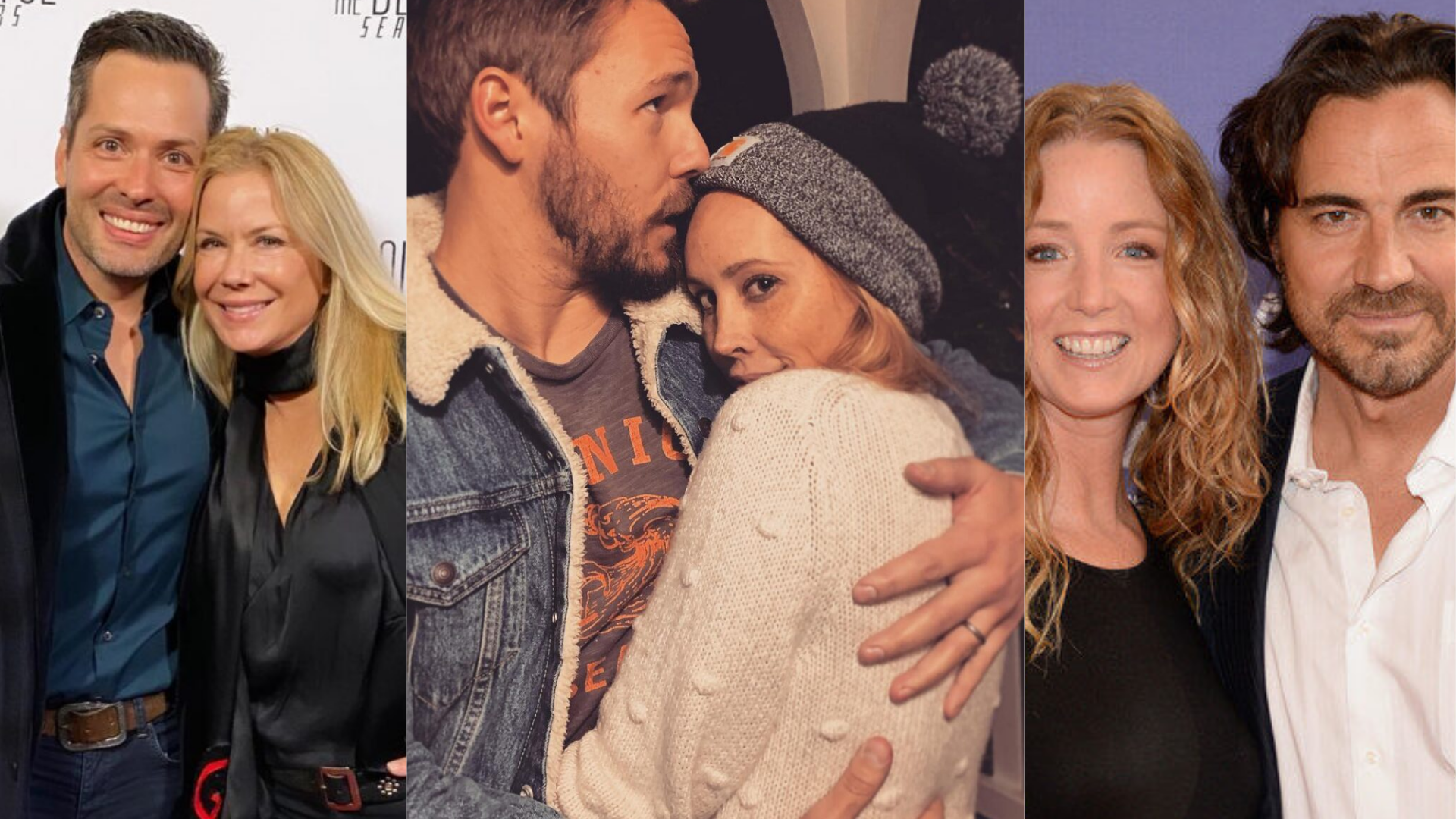 Real life couples from the Bold and the Beautiful

The Real Life Couples of the Bold and the Beautiful

We’ve seen the ups and downs in the lives of the characters on the Bold and the Beautiful. Over the years, there have been many love triangles, cheating scandals, marriages and divorces. So we were wondering if the real lives of these actors are as scandalous as their on-screen characters. Here are the real life couples of the Bold and the Beautiful. Read the full article to know if your favorite B&B stars made the list.

Katherine Kelly Lang has played the fearful Brooke Logan on the CBS soap opera The Bold and the Beautiful for over three decades now. During this time, she has been married and divorced twice. And now the Daytime Emmy Award nominated actress is in a relationship with a man who is much younger than her.

Lang, who turned 59 in July this year, is currently dating personal trainer Dominique Zoida who is 14 years younger than the actress. Katherine is absolutely smitten by her partner, whom she has been with for over six years now.

They met on the set of B&B when Dominique was hired to train the actors for the Malibu Triathlon many years ago.

Before playing Ridge Forrester on B&B, Thorsten Kaye was Patrick Thornhart in One Life to Live in the late 90s. He met his wife, Susan Haskell, on set and they played lovers on the show.

The couple also played opposite each other on Port Charles in the early 2000s. They have two daughters together.

Scott Clifton’s real life romance is nothing like his character’s. In an interview, he revealed that he can’t relate to his B&B character and his never-ending relationship problems. Unlike Liam, Scott has found the woman he wants to spend his whole life with.

The actor has been married to Nicole Lampson since October 2012 and they also have a child together. Their son, Ford, was born in May 2016.

While Rena Sofer’s life may not be as scandalous as Brooke’s, the actress does have a soap-worthy love life. She married director Sanford Bookstaver after meeting him on the set of The Chronicle in 2001. After almost 14 years of marriage, the couple called it quits in 2017 and divorced. However they remained on good terms to co-parent their daughter.

In 2018, Sanford flew in from New York to LA, where Rena was celebrating her birthday just to surprise her. This gesture helped Rena realize that they had something special and eventually they reunited.

Rena later shared with Soaps In Depth that she still calls Sanford her ex-husband and finds its hilarious.

On September 17 2011, Heather Tom got married to her boyfriend of 15 years, musician James Achor. The couple was engaged less than a month before tying the knot in a quiet ceremony.

On October 28, 2012, Tom gave birth to a son, Zane Alexander Achor. And about a year later, the baby became her co-star on B&B, playing the role of her on-screen son, Will Spencer.

After Don Diamont’s first marriage ended in 2002, he began dating his then co-star Cindy Ambuehl. They welcomed twins and dated for the following nine years before tying the knot. But before marrying his wife, Don had another relationship with a co-star.

During his time on Days of Our Lives, the actor secretly began dating Gloria Loring, who was his onscreen love interest and 16 years older than him.

They had to keep their affair under wraps since Loring was going through a divorce with Alan Thicke at the time. The relationship ended after 3 and a half years.

Courtney Hope dated and married Chad Duell, who plays Michael on General Hospital. If you follow them on Instagram, you know that these two were head over heels for each other. They were together for over four years.

The soap stars broke up only eight weeks after their extravagant outdoor wedding. Chad has made his first and possibly his last statement on the matter in an interview with his co-star Maurice Benard.

In September 2020, Denise Richards celebrated her 2nd wedding anniversary with her husband Aaron Phypers. The couple have been dating since June 2017 and had an impromptu wedding in 2018.

Recently, their relationship came under fire after Richards’ co-star Brandi Glanville claimed that they had hooked up but Richards has denied the allegations and said that she and her hubby are going strong.

Denise and Aaron are parents to one daughter while the B&B star also shares two other daughters with actor Charlie Sheen, whom she was married to for four years.

Their characters on B&B may not have crossed paths but Darin Brooks and Kelly Kruger are a supercouple in real life. The soap stars have been married for over four years now. They tied the knot in a traditional Jewish ceremony in Brooks’ home state of Hawaii on March 21, 2016.

On September 27, 2019, they welcomed their first child, daughter Everleigh after a year of trying. Kruger shared to Soap Opera Digest that it was a tough journey but it was definitely worth the wait. Their second daughter, Gemma Wynter Brooks, was born in January 2022.

John and his wife Laurette celebrated their 41st wedding anniversary on February 16 this year. The veteran actor, who plays Eric Forrester on B&B, tied the knot with his wife on a rainy day in 1980. John was 35 and Laurette was 28 when they said I do.

The couple are parents to three children, a son and two daughters. You may recognise their younger daughter, Molly McCook, who is known for her starring role in the Fox show, Last Man Standing.

This isn’t John’s first marriage. As a matter of fact, he has been married twice previously. He was married to late dancer Juliet Prowse from 1972 to 1979 and to Marilyn McPherson from 1962 to 1971.

Flo may not have the greatest luck in her love life on the Bold and the Beautiful but luckily the actress who portrays her, Katrina Bowden, has found love again with boyfriend Adam Taylor. She was previously married to her husband Ben Jorgensen since 2013.

Fate brought Katrina and her former husband together at a Fall Out Boy music video shoot in late 2000s in upstate New York. They dated for a short period of time and then reconnected in 2010. They got engaged in a year later after Ben proposed the night before the SAG awards that they were attending.

The couple had tied the knot at the Brooklyn Botanic Garden in New York City on May 19, 2013.

Annika Noelle is not the one to share her personal relationships on social media. The Bold and the Beautiful actress is active on Instagram but you couldn’t tell if she was dating anyone judging from her posts…until recently. Annika is currently engaged to her secret boyfriend. They have been engaged since January 2021.

Annika doesn’t like to talk about her real life romances. However, the Daytime Emmy nominated star did reveal her relationship status previously in an interview.

She revealed to Soap Opera Digest in 2018 that she was dating Zach Fisher, a musician.
The couple was spotted together in December of 2017 at Noelle’s B&B co-star Heather Tom’s Christmas Party at her private residence in Glendale, California. The two haven’t been seen together in public since then.

Jacqueline MacInnes Wood, who tied the knot with Elan Ruspoli in 2018, recently shared some details on her wedding to Soaps In Depth. We’ve seen Steffy’s extravagant weddings on the Bold and the Beautiful but when it comes to real life, Wood chose to have a low key event with only her closest friends and family.

So in the summer of 2018, when she and her hubby were visiting Italy, they decided to tie the knot. The actress told Soaps in Depth that they had the wedding on a yacht and one of their friends officiated the wedding. Wood and Ruspoli are parents to two sons and are currently expecting.

The Bold and the Beautiful actress surprised fans with her pregnancy news just nine months after welcoming her second child in February last year. After she gave birth to her second son, Lenix, everyone who follows her on Instagram must’ve been surprised that she was swimsuit ready in a blink of an eye. How did the soap star get back in shape so quickly? Watch this video from our official YouTube video to find out!

Did your favorite stars make the list? Let us know who your favorite  real life soap couple on the Bold and the Beautiful is in the comments below.