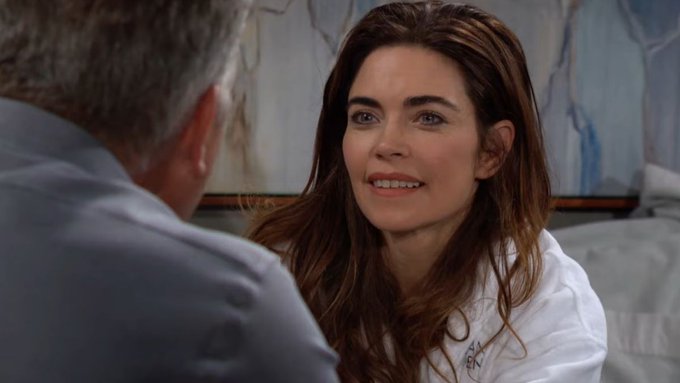 Victoria tells Ashland that she wants to start fresh away from Genoa City. Could she be leaving Y&R for good?

Last week, we mentioned in one of our videos that The Young and the Restless is heading for some major casting shuffle. An insider close to the soap revealed in their podcast that a male and a female actor are on the verge of being written out of the show. Well, after watching the latest Y&R promo, we think we know who that female actor just might be.

Fresh Y&R leaks confirm two big exits ahead on Y&R – Amelia Heinle one of them?

After Willy and Cassie podcast co-host Party Will exclusively reported Soap Dirt of the forthcoming exits, the site confirmed last week that a male and a female actor will be heading out of Y&R in the coming days.

Soap Dirt stated that Party Will revealed the names of these actors as well. However, the site decided to keep its lips sealed until any official announcement was made. Nevertheless, we did get some scoops related to the actors who are leaving.

The site mentioned that the actress could pop up on another soap after leaving Y&R. While this statement is quite vague to come to a conclusion, we speculated that it was referring to Brytni Sarpy since she once left General Hospital to join Y&R. We assumed that she was leaving Y&R too to join another daytime show due to lack of proper storylines for her on this soap.

After watching Y&R’s promo for this week, there’s one more actress that has crossed our minds, though. And she is our very own Amelia Heinle who plays Victoria Newman.

The past few months have been excruciating for Victoria. She is no longer the CEO at Newman Media. Meanwhile, she no longer has a husband despite getting married to Ashland just last October.

It was Victoria who decided to call things off between her and Ashland after her family exposed his lies one after another. Ash begged for forgiveness and claimed that his love for her was genuine but he could not change her mind about divorcing him.

Just a couple of months later, Victoria has decided to start over with Ash once again. “I wanna start over, away from this place, away from all the people. And I don’t want to just imagine it this time. I actually want to do it,” Victoria tells her ex-husband. Ash can’t believe his ears but Victoria assures him that she really means it.

Check out what you’ll see next week on #YR! While you wait for Monday, catch up on this week’s all-new episodes on @paramountplus: https://t.co/aRYyDNylRw pic.twitter.com/VcQN5bVsMd

In another teaser, Victoria is seen arguing with her family after choosing Ashland over them. “[Ashland]’s still the perfect man for me,” she is seen telling her dad who then loses his cool.

“You go and do this, it’ll be the biggest mistake you will ever make in your life,” Victor warns Victoria, who has nothing to say to her dad but a couple of words. “Goodbye, Dad.”

Is Victoria making the right decision? #YR is new this week on @CBS. Watch the latest episodes on @paramountplus! pic.twitter.com/tHy8VQsQXg

What does Victoria’s goodbye mean on Y&R? Could she really be leaving Genoa City for good to start anew with the love of her life? Could Amelia Heinle actually be that lead actress who’s decided to go from the soap? Share your thoughts with us in the comments below.