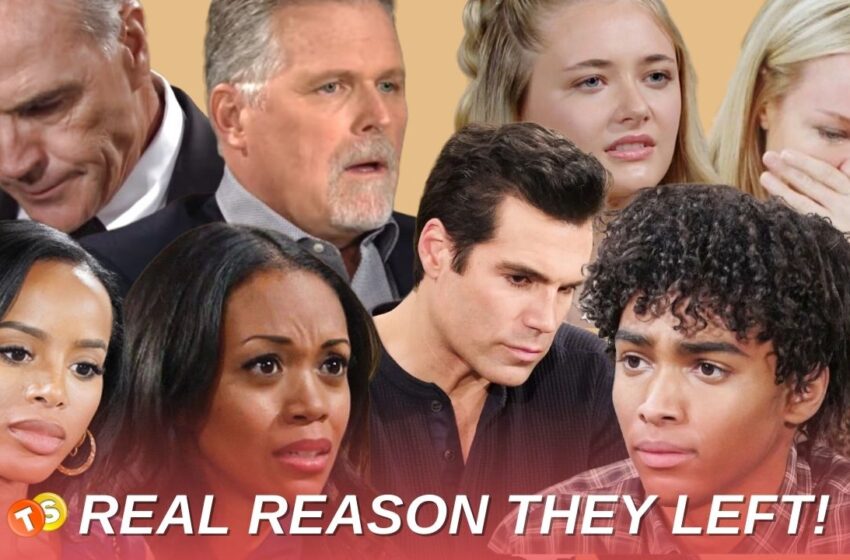 The Young and the Restless's Shocking Exits in 2022

2022’s Most Shocking Exits, Firings, and Passings of The Young and the Restless

From the return of Diane Jenkins and Kyle Abbott to Daniel and Danny Romalotti, the Young and the Restless gave the audience so much in 2022. Then, of course, it also took away a lot. It breaks our hearts to see our favorite actors and characters being taken away from us. But at the end of the day, it’s one of the inevitable factors that keep soaps like this running for decades. As it happens, the year 2022 had some of the biggest character exits that rocked the soap world. Here’s a complete countdown on the exits, firings, and deaths that took place at Young and the Restless last year.

2022 kick-started with the shocking firing of Richard Burgi, the original actor to portray the role of notorious Ashland Locke on the show. A soap opera veteran, best-known for his role in Desperate Housewives, Richard Burgi made his debut in March of 2021 as a ruthless New Yorker tycoon.

Burgi was supposed to have a brief story-arc on the soap. But that changed once Ashland became Victoria’s new love interest. He went on to sign an extended contract at the show which assured him a storyline for at least through 2022. However, in January, Burgi announced on Instagram that he had been fired. He explained that he was fired over some covid-19 guidelines, which the actor apparently failed at complying with.

Upon the firing of Burgi, The Young and the Restless hired another soap opera veteran to fill-in for the role of Ashland Locke. The Guiding Light famed Robert Newman took over the role of Locke and made his debut in February, marking his first return to the soap world in thirteen years.

When Robert first took over the role of Locke, the character was believed to be dying of lung cancer. So everyone assumed that the actor’s stint would be short-lived. As it turned out, Locke had been lying about his cancer, which automatically extended his storyline.

Shockingly, in just five months, the devious villain got killed off during an unexpected altercation with Nick Newman. Locke’s unexpected death sparked outrage amongst the viewers, with many hoping that he would turn up alive. However, the soap does not seem to have any plan of resurrecting Locke just yet since it has got its own new villain in Jeremy Stark.

The Young and the Restless did not have just one but two shocking deaths last year that sent fans into a frenzy. Beside Locke-Ness Monster, Genoa City residents also lost a hero, an all-around good guy Rey Rosales last year that devastated everyone.

Rey had been getting very little screen time for several months before he was put up for a juicy storyline with a possible romance with Chelsea Lawson. However, any future for the pairing was scrapped as Rey got killed in a car wreck.

As seen on the soap, Rey’s death took place off screen after he got into an accident involving Victoria and Ashland.
Vickie and Ashland suffered minor bruises but Rey lost his life in the accident. In real life, Vilasuso had been unfairly fired as a part of the soap’s budget management for the return of actors like Susan Walters and Michael Mealor.

Holden and Ryan Hare are twin boys who portrayed the role of Johnny Abbott on Young and the Restless for a decade. The young boys joined the soap in 2012 and made sparing appearances whenever the storyline demanded.

Johnny had not been in Genoa City as he was in a boarding school for the past few years. However, Chelsea’s storyline opened the gateway for his return in 2022. Surprisingly, Johnny returned from the school a little grown up than before. As we call it in the soap world, Johnny was SORASed and thus Holden and Ryan were replaced with Paxton Mishkind.

In 2021, Alyvia Alyn Lind left the role of Faith Newman to pursue other acting opportunities. She left in April of 2021. Then, that same month, Reylynn Caster was hired as the new Faith Newman.

The Big Show Show famed Reylynn Caster had a good one-year run on the soap before being written out in September 2022. It was revealed that her character was leaving for college and that she won’t return until next year. Reylynn had taken over Faith’s role during a critical storyline where she needed an emergency organ transplant. So watching the show let go of her without any significant storyline was not appealing to fans at all.

More unappealing than Faith’s exit was Moses Winters’. Being the only biological child of the late Neil Winters, Moses is considered a legacy character on Young and the Restless. After 7 years of missing in action, a grown-up Moses returned to Genoa City in March 2021 with Jacob playing the part.

Viewers were excited to see how the Winters family storyline would be shaped with Moses returning to the family. Sadly, the character was dropped off screen unceremoniously after just a year and half. Storylines revealed that Moses had left for college too. But unlike Faith, he did not even have a proper final episode, which agitated fans.

Leigh-Ann Rose began portraying the role of Imani Benedict in 2019. Imani left Genoa City in mid-2022 to look after her ailing mom Naya Benedict. In real life, Leigh-Ann had left Y&R to pull other acting duties. So when her character was to return in September, Leigh-Ann could not be back and Denise Boutte had to sub for her.

Rose was said to have a scheduling problem as she may have been filming a 2022 holiday movie. Now that the holidays are over and 2023 has started, there’s still no sign of her return. With Imani’s entire family out of GC, it’s safe to assume that Imani has been written off the show and that Leigh-Ann has been fired, at least for now.

Mishael Morgan’s exit has to be the most shocking departure of Young and the Restless in 2022. After missing in action on-screen for months, Morgan finally confirmed in October that she had requested a status change at the soap. The news came as a shock to her fans as she had promised to be back on screen “very soon” in a social media post. As per her promise, Morgan did return but only for a brief scene and left once again.

“I just wrapped my last scenes back at Y&R and I just wanted to let the cat out of the bag. A lot of people have noticed that my name is not on the main credits anymore and I wanted everybody to know that it was my decision. I decided, actually back in December [2021], that I wanted to take a bit of a step back from the show,” Mishael wrote on Instagram following her final episode.

Reports state that Morgan is now a recurring performer at Young and the Restless and that she would be back in the future. However, considering the fact that Morgan has landed an exciting new role on Chicago Med, her return to the CBS soap seems kind of far-fetched.